How far are we from clean hydrogen heating our homes and workplaces?

The UK government’s new Energy White Paper defines our pathway to net zero greenhouse gas emissions, and clean hydrogen is very much part of this ambition. The vast majority of hydrogen manufactured in the UK, however, is fossil fuel based; far from clean or green and far from affordable. This hydrogen is typically called ‘grey’ hydrogen and comes from the reformation of natural gas – a process which releases CO2 into the atmosphere. 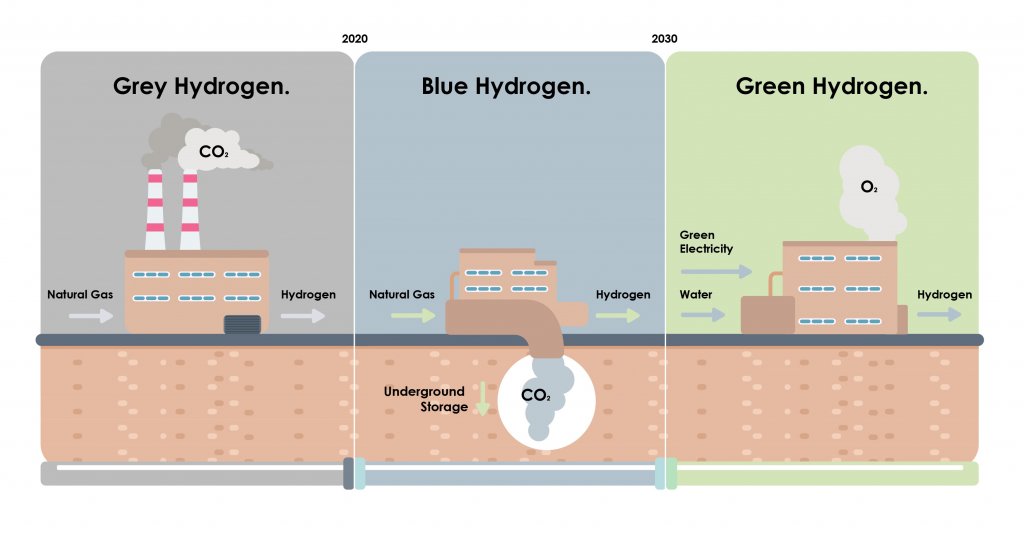 A comparison of ‘grey’, ‘blue’ and ‘green’ hydrogen.

To manufacture clean hydrogen the CO2 released during its production needs to be captured; a process known as Carbon, Capture, Use and Storage (CCUS). The ‘cleaned-up’ hydrogen is known as ‘blue’ hydrogen. However the minimum amount of CCUS required to deliver a successful transition to a hydrogen economy would require large production facilities, which would likely need to be shared with the CCUS infrastructure that is required to decarbonise other industrial manufacturing processes (to deliver affordability). CCUS is still very much in its infancy but there are some emerging success stories.

There is an alternative: ‘Green hydrogen’ is produced through electrolysis of renewable energy (water – H2O can be split into H2 and O2 using renewable electricity). However significant energy is lost during production so taking green electricity and transforming it into green hydrogen is not only less efficient but will add further processes, risk and expense to our currently successful green energy supply chain. So, given the UK already needs to increase its off-shore renewable electricity generating capacity by 400% to meet the electrification of heat and transport perhaps, this should not be diverted to green hydrogen, which will require further renewable generation and the output will be more expensive.

It is nevertheless possible that wasted renewable electricity (e.g. night time off-shore wind generation when demand is low) could be transformed to compressible and transportable hydrogen. Using this same logic, however, it might also be argued that some existing oil based economies (such as those in the Middle East that have vast solar renewable energy potential and existing liquefied natural gas infrastructure) could become global suppliers of green hydrogen. This opportunity is certainly being considered in some regions.

Our need for blue and green hydrogen is further exacerbated by the fact that the calorific value of hydrogen is three times less than that of natural gas. This means that three times more hydrogen is required to produce the same quantum of heat and hot-water as our existing natural gas supply: While this three-fold increase in hydrogen is possible within the existing gas network (hydrogen is less dense than natural gas and can be compressed) this does not reduce the huge quantum of hydrogen that would have to be stored to meet seasonal winter peaks (and this is before we take into account winter events such as ‘the beast from the east’, which recently tested the UK’s existing gas storage capacity).

Unlike the flow of natural gas from the North Sea, which can be throttled up or down, storage demand is further increased due to the linear manufacture of hydrogen throughout the year: Overproduction in summer will be required to meet winter demand.

Of the clean hydrogen options available, the Energy White Paper suggests a preference for ‘blue’ hydrogen over ‘green’ hydrogen, indicating that hydrogen will be manufactured where there is an existing need for clean hydrogen. This could be to replace gas and ‘coking coal’ in the manufacture of steel (much media attention has recently been focussed on a new coal facility to supply such needs), but also where it will be much more economic to build hydrogen manufacturing plants. Again, the CCUS infrastructure can be co-located with the CCUS infrastructure that is required to decarbonise our big manufacturing industries.

Heating our homes and workplaces

Hydrogen is a gas so can be used in the same way as natural gas, including:

However, given the poor execution of previous efforts to decarbonise our existing homes and workplaces through energy efficiency programmes, hydrogen could have great value and much of the attention is currently focussed on this. Programmes such as the Green Deal were a profound failure – and it now looks like the current Green Homes Deal is going the same way (most of the government budget is now withdrawn and there is very little confidence within the contracting supply chain).

So piping hydrogen into our existing homes and workplaces would be ideal because it also means that we can continue to use wet radiator systems and 3-phase electricity supplies aren’t required; so a relatively modest retrofit compared with heat pumps. But again the enablement of the supply chain will be an enormous challenge and affordability, when compared with electricity, will be a key issue.

The government Energy White Paper is very keen to promote hydrogen ‘communities’ at a village or town level (probably close to the UK’s large manufacturing clusters), but nobody is going as far as suggesting that hydrogen is the ‘silver bullet’ to decarbonise our existing homes and workplaces. We must continue to rely on improvements in building fabric and systems performance and the electrification of heat for at least the medium term – sadly it is unlikely that you or I will have hydrogen (or a low carbon hydrogen/biogas/natural gas mixes) flowing through the gas network into our homes or workplaces any time very soon!

However, hydrogen certainly remains part of the mix in our net zero future and we will see hydrogen supporting sectors that value fuel very highly. So, in addition to a few well considered ‘hydrogen communities’, hydrogen has a real and hopefully near-term future in aviation, shipping, road freight transport, and energy-intense industrial processes.

We very much welcome initiatives such as the Freeport East Hydrogen Hub project which proposes to use nuclear and wind energy to manufacture green hydrogen for maritime and transport uses. This could provide 20% of the 5GW target as defined in the government’s recent 10-point green revolution plan.