The Gilbert & One Lackington

Originally created as a private members club by Frederick Gould and Giles Gilbert Scott, this dramatic refurbishment design from Stiff & Trevillion Architects restores many of the building’s original features, while setting new standards for sustainable design.

First appointed by Brookfield to perform feasibility assessments for the refurbishment, Hilson Moran was retained throughout the detailed design stage and on to completion.

The initial challenge was to separate the two buildings, which had previously been joined for use by a single tenant, Bloomberg. Due to the complex design of the building – a ‘3D puzzle’ with floors topping out at different levels – our M&E team had to design four separate plant rooms, feeding the building with air at 8 different riser locations.

By locating these plantrooms at rooftop level, we have been able to return the lower ground floor back for use as office space, freeing up over 15,000 square feet of lettable area.

Our carbon consultants ensured the client’s sustainability requirements we met, retaining 90% of the original, historic structure and façade and saving 52,000 tonnes of carbon dioxide, compared to a new build. This is equivalent to nearly 30,000 return flights from London to New York. The refurbishment is Net Zero Carbon in Construction, limiting embodied carbon to 147kgCO2e/m2 GIA for the whole building, significantly under the LETI 2030 targets of 350. Residual carbon will be offset and carbon accounting is independently verified.

Revealing newly refurbished ceiling soffits dramatically transformed the building’s office spaces – made possible by utilising the floor void for our chosen air conditioning system, as well as all other building services.

Operational carbon has also seen a dramatic reduction through the installation of energy efficient heat pumps and the provision for photovoltaics on the roof, allowing on-site electricity generation. Hilson Moran developed an operational energy model and recommended a pathway to Net Zero Carbon in Operation.

Natural ventilation is complimented by external courtyard and terrace spaces, offering tenants over 10,000 square feet of exterior spaces and improving both biodiversity and occupant wellbeing.

Our vertical transportation team ensured the integration of five additional lifts in one brand new core, as well as replacement of two existing lifts to meet modern standards and ensure a seamless flow of people throughout the building.

Launched in December 2021, The Gilbert and One Lackington showcase the power of restoration and refurbishment in creating modern, architecturally rich spaces to work and socialise. 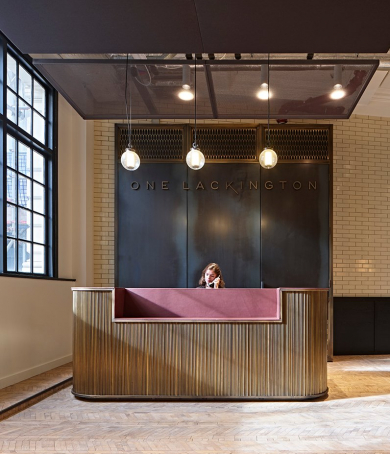