On September 27th we hosted our second Hackathon event in the Future Forty series, this time around in the offices of Brookgate in the City of Cambridge following our very successful Wearables event held earlier in the year in London. The series forms part of Future Forty – a year of events and activities in celebration of Hilson Moran’s forty years in practice, but looking forward to the next 40 years.

Two teams were given the opportunity to ‘hack’  a local problem of the transportation network in Cambridge and in particular how autonomous vehicles could be integrated into the city’s infrastructure in the future to relieve the chronic problems of the city’s transport network..

Following a short overview of the current advancements in driverless vehicle tech by Hilson Moran’s Associate Sustainability Consultant, Marie-Louise Schembri, the assembled throng split off into two teams to brainstorm their ideas over drinks with a brief to look at ‘A Day in the Life’. Many scenarios centred around family and commuting life, for instance what would happen if it’s the school run and two children need to get to school in differing locations and both parents need to get to work? The solutions varied from individual autonomous pods to a driverless school bus funded by Tesla!

After a short pizza break and team regroup to finalise their solutions, both returned to present their ideas to the wider group and judging panel; Stefanie Rachmann-Davies, of transport consultants Odyssey, Dan Clarke of Smart Cambridge, and Chris Birch Head of Sustainability at Hilson Moran.

Team A chose a more theatrical re-enactment of parallel autonomous vehicle journeys for the commute and school run, whilst Team B developed a more detailed including a range of transportation options including the exotic hyperloop train, a 700mph Elon Musk-designed system which works by magnetic levitation.

After much deliberation the judges deemed Team B as the winners based on their clearer consideration around logistics of these systems and they offered a larger range of choices for the traveller.  The team also considered impacts on the built environment in 2044 envisaging a future domestic street scene with children playing on a wide street in the absence of speeding vehicles and parked cars.

A great evening culminating in team B walking away with winner’s certificates and a bar of chocolate! The photos say it all.

To find out more about our Future Forty series of event see Future Forty. And don’t forget to join us for the next one if you can.

Cambridge Hackathon in the news: 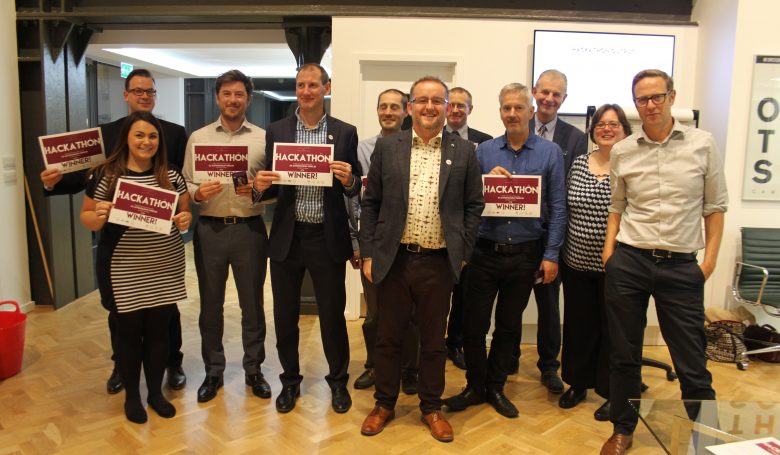 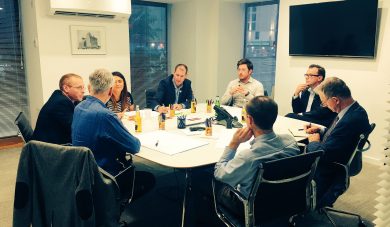 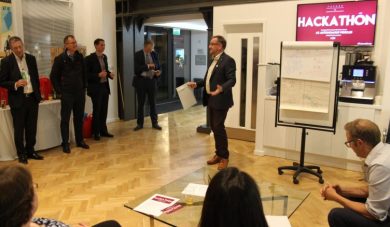