A perfect storm: Can tall building design lead to a Net-Zero Carbon future?

During this unprecedented global health pandemic, the government mandated instruction to work from home has forced a mass social experiment, which has accelerated the evolution of our interaction between work, social and leisure activities. Whilst the new vaccine programmes offer a much-anticipated key to unlocking workplaces back to full capacity, the taste of a tempting alternative life-work balance is now firmly established and likely to become a more permanent status in many businesses.

A recent survey published in The Independent reported 42% of London living office workers are considering moving to coast and 41% are looking for access to better air quality. At the same time, there are populist claims that the concept of the city centre office, particularly in tall buildings, is dead. However, many industry sectors have acknowledged that an organisation’s culture, purpose and existence is dependent on having some form of physical home, where workers can meet, collaborate and network. What does this mean for the future environment of a city centre?

Consider the early months of the lockdown as an early insight into answering this question. In May and June 2020, London’s dense city space took on a surreal calm environment, devoid of traffic, city workers, tourists and people going about their daily business. The urban environment was eerily silent, and the air looked and felt cleaner.

The quietness punctuated by the occasional noise echoing around the hard urban surfaces was particularly noticeable in the City of London’s tall building eastern cluster district. Recent published data confirmed traffic reduction during this period reduced by 78% in central London, which resulted in Nitrogen Dioxide levels falling by 47% and urban noise levels halving by a measured 8dB. Did this unusual circumstance provide a glimpse of what a net zero carbon future could actually feel like? 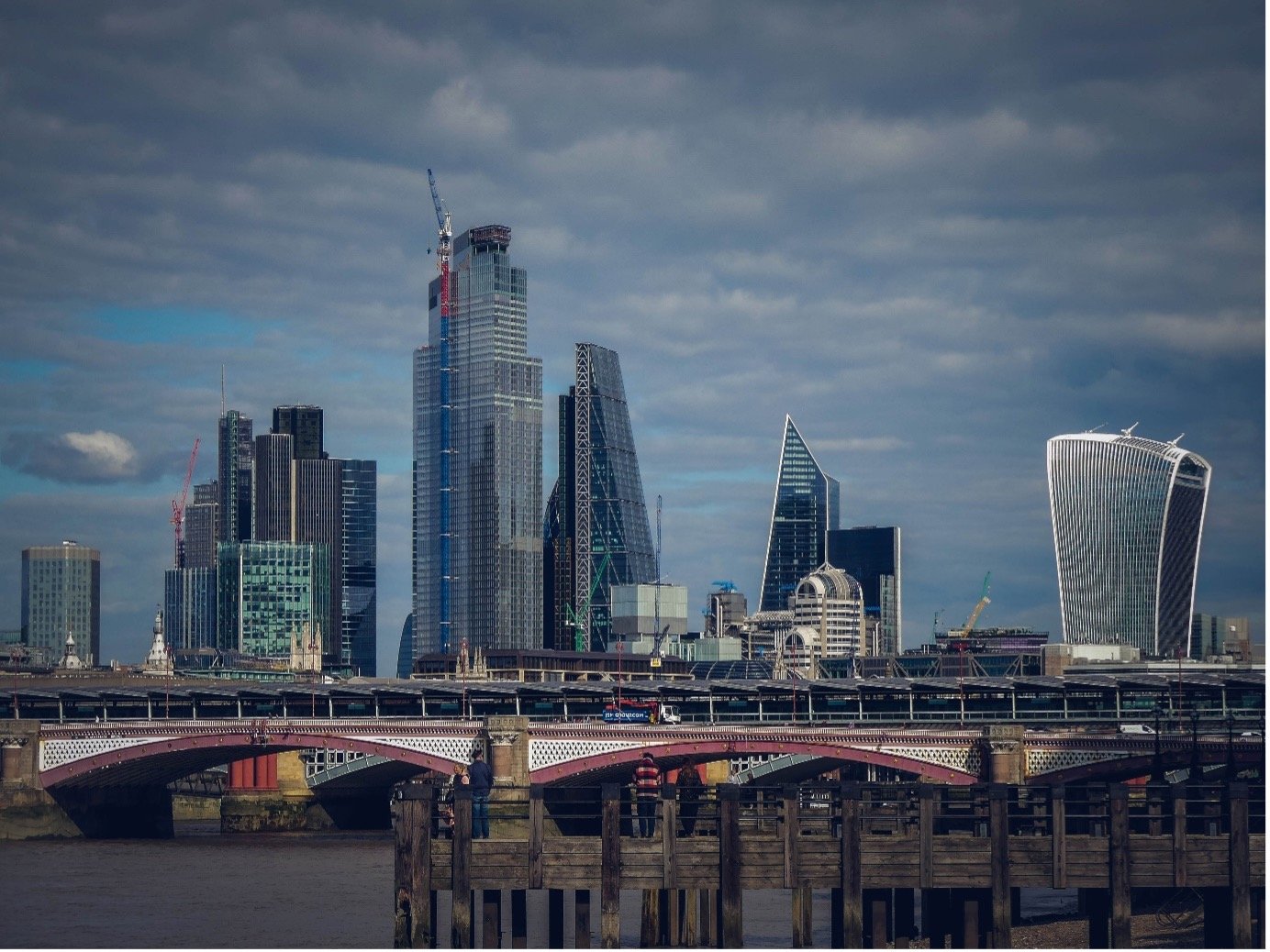 Traffic reduced by 78% in central London, over the initial U.K. lockdown

The spread of COVID-19 at a time when there has been a general acknowledgment that humanity is at the brink of a climate crisis, has accelerated the development of a new approach. Predicted seismic shifts in transport, energy and digital technology can revolutionise the design and operation of tall buildings today.

The anticipated transport revolution, powered by electricity and hydrogen fuel cell technology as well as a continued switch to mass cycling, will have a profound impact on London’s dense urban environment. Walking, cycling and electric vehicles delivering goods and services will dominate our city centres. The city’s soundscape will drastically alter; this will also have a direct correlation to cleaner air.

Cleaner air and a more tranquil urban environment present an opportunity for deploying natural ventilation strategies to maintain comfortable environmental conditions in high rise offices for longer periods. Additional health and well-being benefits are provided through a direct connection with the outside environment.

At the same time, the rapid decarbonisation of the national grid has triggered the biggest office building engineering design change for at least 50 years, not seen since the oil crisis in the 1970s. The exponential increase in wind power has been phenomenal over the past decade, increasing U.K. capacity from 1GW to 10GW today. The U.K. is the world leader in offshore wind power, with more installed capacity than any other country. Big investments are targeting 30GW by 2030, enough to power all homes in the U.K.

Following the transport and energy revolutions, technological change, driven by the digital fourth industrial revolution, will have a drastic impact on air conditioning reliance in tall buildings.

Many people now use low- powered laptops and tablets in the workplace, accessing data via the cloud and only connecting to low energy screens when required. The likely lesser occupancy densities, a reaction to the pandemic and more flexible space, will also accelerate the reduction in heat gains inside offices. 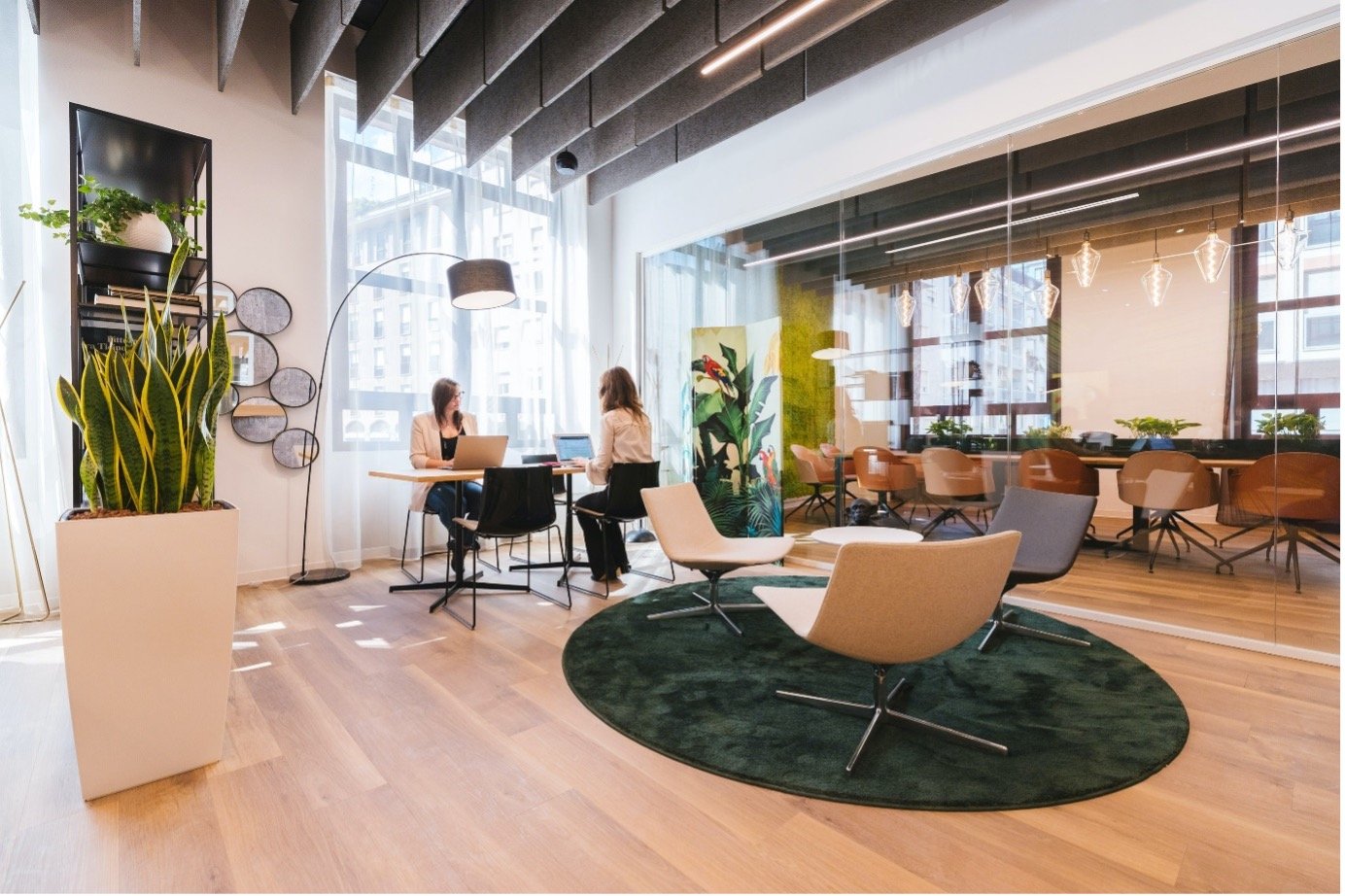 Flexible working space will accelerate a reduction in heat gains inside offices.

A change in office culture, pioneered by the technology sector, has ushered in a more relaxed casual dress code in offices, where people adapt their clothing choice to the seasons. This provides the opportunity for internal temperature ranges in offices to be widened, depending on the time of year, to save energy use and reduce maximum cooling system capacities. During hot outdoor summer periods, indoor office temperatures of 25oC or 26oC should be acceptable, as opposed to consuming energy to condition air to a rigid 21oC all year round.

Is this the moment building designers should seize and implement a radical change in the design approach of commercial offices? Can tall buildings lead the way?

The improved environmental change in the urban habitat witnessed during lockdown must encourage tall building design to radically change and lead the way to a net zero carbon future.

There is no doubt we are witnessing a perfect storm. The emerging landscape of a quieter urban environment, cleaner air, clean energy supplies and a significant reduction in office internal heat gains, accentuated by a workforce flipping their time between remote digital working and social interaction in offices, can lead us to a net zero carbon future much sooner than the current UKGBC led commitment to achieve net zero in operation of buildings by 2030.

This could have the biggest impact in tall building design, since elevators were installed in the Empire State building in 1931 and the first office air conditioning system installed in 1928 in the Milam building in San Antonio, Texas.

By virtue of their stature and prominence in the urban habitat, the design of tall buildings has an opportunity to lead by example. A natural ventilation strategy applied in tall buildings has the biggest potential operational carbon impact. This can offer a triple win result: providing health and wellness benefits to the occupants; a significant reduction in the building’s energy consumption; and a major contribution to achieving a net zero operational carbon emissions sooner than 2030.

If there is one positive outcome out of this tragic world health pandemic, it is the improved environmental change in the urban habitat witnessed during lockdown. We must encourage tall building design to radically change and lead the way to a net zero carbon future—sooner rather than later.

Reflecting on the survey referenced at the beginning of this article, which reported that a sizable proportion of London living office workers are looking for access to better air quality and are considering moving to coast. Clean air and quieter streets are coming to cities very soon. Although it will still be nice to go to the seaside for a day trip.

This article is based on Design Director Vince Ugarow’s presentation at the CTBUH 2020 Conference – Post Crisis City.